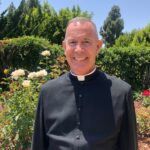 Fr. Kevin Sweeney, comes to us after spending the last 24 years on Active Duty with the Navy and Marine Corps. A homegrown priest ordained for the Diocese of Orange in 1994. Fr. Kevin was born in Newport Beach and grew up in Costa Mesa. St Joachim is his home parish.Fr. Kevin graduated from Newport Harbor High School, has a BA in Philosophy from the Dominican School of Philosophy in Berkeley CA. For his graduate degree in Theology, Fr. Kevin studied at Mount Angel Seminary in St. Benedict OR.

After serving 3 years at San Francisco Solano Parish in Rancho Santa Margarita, Fr. Kevin was given permission from Bishop McFarland to go on Active Duty as a Navy Chaplain. For the next 24 years Fr. Kevin has served around the world in a variety of assignments, 10 tours, 3 with the Navy and 7 with the Marine Corps. On 30 June 2021 Fr. Kevin retired as the Command Chaplain for Camp Pendleton and Marine Corps Installations West. Fr. Kevin retired at the rank of Navy Captain.

Father Gaston Mendiola Arroyo was born in 1983 in the state of Veracruz, Mexico. He was raised in the Jehovah’s Witness tradition but decided to enter the Catholic Church when he was 16 years old after profound biblical and doctrinal study. Seeking to follow Christ more deeply, Arroyo entered the seminary in his home town. Unfortunately, this was short lived as his family moved to Ciudad Juarez, Chihuahua seeking work to support the family. Later, Father Gaston Mendiola Arroyo joined a group of missionaries dedicated to the rehabilitation of people with drug addiction where he served for two years. He then entered the seminary in Mexicali in Baja California, completing six years of study. Bishop Vann invited  Father Gaston to serve the Diocese of Orange in support of the large and growing Hispanic population. He finished two years of study in theology at the Seminario Hispano de Santa María de Guadalupe in Mexico City. Fr. Gaston was ordained to the priesthood on June 9, 2018 and has been assigned to Saint Vincent de Paul Church. 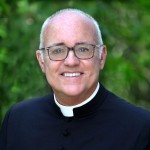 Having attended the University of San Diego and Gonzaga University in Florence, Italy, he was graduated from Loyola University of Los Angeles, with a Bachelor of Arts degree in Psychology. He has also received a degree in Philosophy from the Dominican School of Philosophy and Theology at the Graduate Theological Union, Berkeley, California, where he also studied theology. Theological studies were completed at Saint John’s Seminary in Camarillo, California, where a Master of Arts degree in Theology was granted.

On February 12, 1983 Father Karcher was ordained to the priesthood by Bishop William Johnson for the service of the Roman Catholic Diocese of Orange, California.

He has served at St. Norbert Church in Orange, St. Anne Church in Santa Ana and St. Joachim Church in Costa Mesa, and is presently the pastor at St. Vincent de Paul Church in Huntington Beach, California since July 1, 1995.

Fr. Jerome is the founder and Chairman of the Board of Mercy House Living Centers which serves and houses homeless men, women and children in Orange County at its various facilities.

For more information on Mercy House, please click on the link below: 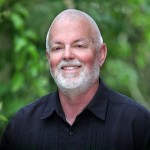 Deacon Jerry was born in Los Angeles and raised in Anaheim.  He is among the first families of Saint Justin Martyr parish.  He attended grade school at Saint Justin Martyr and high school at Servite High School in Anaheim.   He graduated with a BA in business management from Cal State Fullerton.  He is retired from the corporate world and collaborates in various parish ministries as well as Detention Ministry for the Orange County jails and visits patients at UCI hospital.Deacon Jerry and his wife, Cathryn, moved to Huntington Beach in 2002 and joined St. Vincent de Paul Church.  He was ordained a Deacon for the Diocese of Orange by Bishop Tod Brown on May 21, 2011 and was assigned to serve at Saint Vincent de Paul Church. Deacon Jerry’s contact information:  or call 714-842-3000 ext. 124 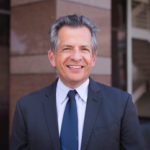 Deacon Angelo was ordained in October 2015 from the Diocese of Orange.

He and his wonderful wife Cindy have been members of St. Vincent de Paul Church for many years and have supported several ministries like bringing communion to the sick and homebound, during Mass and served as Chairs of the annual Septemberfest. They also support and run the Alpha Marriage course at the parish. In addition, they are involved with the Worldwide Marriage Encounter ministry. They and their 3 children have been active members and participate in the life of the parish.